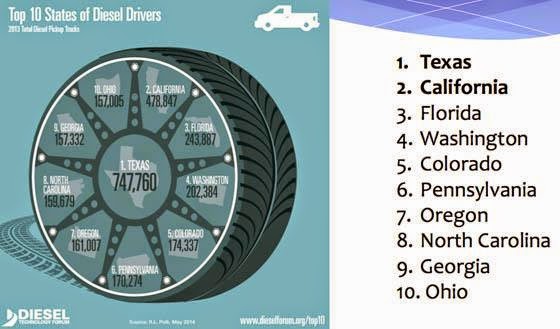 Ever wonder which state last year had the most pickup trucks with a diesel engine under the hood? Did you ever think about which state — in 2013 — had the highest percentage of vehicles on the road that have a bed at one end and a combustion ignition setup inside the engine block? Well, the Diesel Technology Forum just released its 2013 statistical report, which provides all those numbers for 2013 and much more.

According to the DTF, a larger percentage of total drivers have diesel pickup trucks in the central north region than anywhere else in the U.S. Specifically, Montana leads the way because of energy exploration and mining operations, as do all of its neighbors. As to the leader of diesel pickups, it probably comes as no surprise that the state that has the most pickups in the U.S. also has the most diesel-equipped pickups: Texas, with almost 750,000.

Other interesting tidbits include the fact that West, Southwest and Midwest states (like California, Arizona and Illinois) are experiencing the fastest turbo-diesel pickup growth, while Northeast states (like Vermont, Delaware and New Hampshire) are growing much faster than ever as well.

Check out these facts and more in the full report by clicking here.

The top 10 states with most diesel registrations in 2013:
Image from Diesel Technology Forum

From  www.pickuptrucks.com
Posted by National Ford Truck Club at 9:00 AM