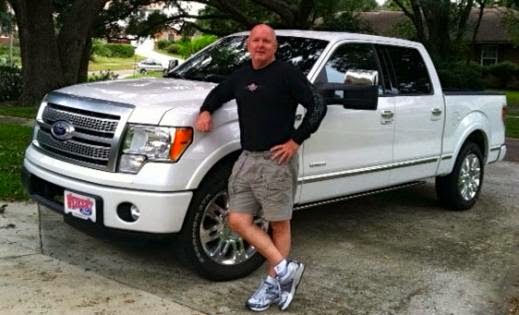 Bob Stanton used to attract a crowd when he loaded his motorcycle onto his truck. At the time Bob owned an old truck that required the use of a ramp to get the bike in and out of the bed. “Rolling the bike up on a ramp or riding it up onto the truck was never something I was that comfortable with, nor was it that safe,” recalls Bob, who noticed that people would often gather when he got ready to make his short but precarious  maneuver. “They didn’t think I could do it.”

Bob, who lives in San Antonio, solved that problem when he bought a 2011 Ford F-150 and a trailer. “The trailer lowers to the road level and you ride the bike up onto a platform,” explains Bob. “And it travels perfectly behind the truck.”

The solution couldn’t have come at a better time. An avid motorcyclist since the 1970s, Bob had just retired from a career as a government fleet manager. Having spent years riding in and around wherever he was living at the time, Bob was eager to see more of America from the unique vantage point of the seat of his motorcycle. “I used to ride on weekends with friends, but I really wanted to see more of the country,” he says. “I like the freedom it gives you, and you see so much more of the road and the countryside on a motorcycle than anything else.”

Bob has certainly taken advantage of his opportunity to roam. His F-150 has already taken him and his bike to memorable motorcycle destinations like the Blue Ridge Parkway (his favorite, and a place where bikers often outnumber motorists by as much as two to one) and Bike Week in Daytona Beach, Florida.

In total, Bob’s F-150 has taken him to 20 states, including Colorado where he made an unforgettable trek up Pikes Peak. “It was cold and the road was icy and there were some spots where I probably shouldn’t have been on a motorcycle,” he says. “But it was an incredible ride and an accomplishment for me.”

Already Bob has a busy slate of future rides planned, including a springtime trip to Arizona as well as a return visit to the Blue Ridge Parkway next fall. But the ride Bob is most looking forward to is the one he  will take with his son, a fellow F-150 owner who is in the military and currently deployed overseas. “I haven’t had the chance to ride with him yet,” he says. “But I’m hoping to have that opportunity at some point after he returns.”

From Ford Social
Posted by National Ford Truck Club at 9:00 AM