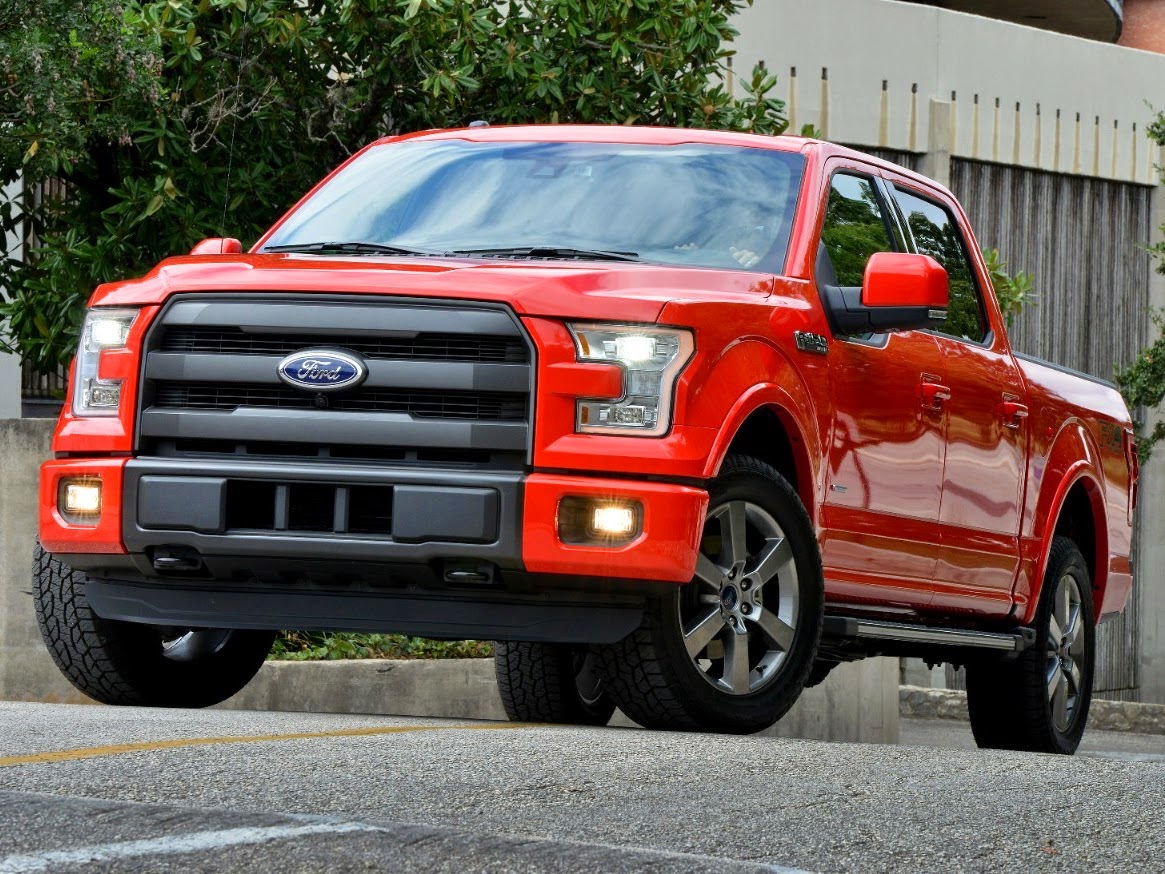 Ford advances to the next level in providing customers with more fuel-efficient vehicles, as the new 2015 F-150 lineup includes the highest EPA-estimated fuel economy ratings of any gasoline-powered full-size pickup sold in America.

Up to 700 pounds lighter than current models, the new F-150 4x2 with Ford’s 2.7-liter EcoBoost engine has EPA-estimated ratings of 19 mpg City, 26 mpg Highway and 22 mpg Combined. That is 5 percent to 29 percent better than current F-150 models, depending on engine and driveline configuration on the combined cycle.

“We set out to create the future of tough with the new F-150,” said Raj Nair, Ford group vice president, Global Product Development. “We are delivering with the toughest, smartest and most capable F-150 ever – and now the highest EPA-estimated fuel economy ratings of any full-size gas-powered pickup in America.”

The improved performance is enabled by saving weight through the use of high-strength steel and high-strength, military-grade, aluminum alloys plus smart engineering. The weight savings not only improve fuel efficiency, they improve the new F-150’s capability and performance. Combined with EcoBoost engine technology, the F-150 now tows as much as 1,100 more pounds and hauls as much as 530 pounds more than today’s model with a 5 percent to 16 percent better power-to-weight ratio.
Ford is producing trucks and now has started shipping the all-new pickups to its dealers.

Introduced in 2007, the Blueprint is a plan of near-, mid- and long-term product and technology actions that incorporate fuel-saving technologies into the company’s vehicles, while continuing development of breakthrough technologies.
Today, Ford has 2 million EcoBoost engines on the road in cars, utilities and trucks.
EcoBoost technology was first offered for F-150 customers in early 2011 with the 3.5-liter EcoBoost engine. To date, Ford has sold 600,000 F-150 trucks equipped with 3.5-liter EcoBoost engines, helping Ford customers save an estimated 68 million gallons of gasoline.

These trucks represent a substantial improvement over trucks of the past. Owners of seven- or eight-year-old trucks who are in the market for a new truck may be surprised by the impressive capability of the 2015 F-150. For example, returning owners of 2008 model year F-150s could see EPA-estimated fuel economy rating improvements of up to 43 percent and power-to-weight increases of up to 46 percent, while towing could improve as much as 3,900 pounds and payload could improve as much as 1,390 pounds, depending on engine and configuration.

Equipped with 2.7-liter EcoBoost, the all-new F-150 is a better value than even diesel-powered pickups. For instance, the $495 option on the Ford is significantly less than the $4,470 3.0-liter Ram EcoDiesel option.

In addition, with diesel prices currently 76 cents per gallon more6 at the pump, each 3.0-liter Ram EcoDiesel fill-up costs over $24 more than the new 2.7-liter F-1507. That means at today’s fuel prices Ram EcoDiesel owners are not able to offset the additional cost of their EcoDiesel engines with fuel savings8.
“Once again, the Ford F-150 establishes new standards in durability, capability and efficiency, defining the future of tough,” said Nair.

Ford Motor Company, a global automotive industry leader based in Dearborn, Michigan, manufactures or distributes automobiles across six continents. With about 187,000 employees and 62 plants worldwide, the company’s automotive brands include Ford and Lincoln. The company provides financial services through Ford Motor Credit Company. For more information regarding Ford and its products worldwide, please visit http://corporate.ford.com.
Posted by National Ford Truck Club at 6:00 AM