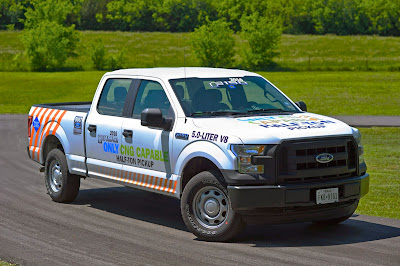 Responding to customer requests, 2016 Ford F-150 with the 5.0-liter V8 engine will offer a gaseous-fuel prep option, making it the only light-duty pickup capable of running on compressed natural gas or propane

Ford has sold more than 57,000 vehicles prepped to run on clean, low-cost compressed natural gas and propane – seven times more than all other major U.S. automakers combined – since 2009

Ford has the broadest portfolio of natural gas and propane offerings, including 2016 F-150 and Super Duty trucks, and Transit and Transit Connect vans and wagons

Ford, America’s truck leader, will offer the 2016 F-150 with an available gaseous-fuel prep package that enables 5.0-liter V8-powered models to run on clean, low-cost compressed natural gas or propane, making Ford the only manufacturer of a CNG/propane-capable half-ton pickup.

The 2016 Ford F-150 – the toughest, smartest, most capable F-150 ever – with 5.0-liter V8 engine will be available to order this summer with a factory-installed, gaseous-fuel prep package that includes upgraded intake and exhaust valves and valve seats to ensure the engine performs to Built Ford Tough standards customers expect.

“We surveyed customers likely to use natural gas or propane, and 72 percent told us they want to have these alternative-fuel capabilities available on F-150 with the 5.0-liter V8 engine,” said Jon Coleman, Ford fleet sustainability and technology manager. “We expect the gaseous-fuel prep package will be even more popular than it was on the 2014 F-150 with the 3.7-liter V6 engine, given the capability of the 2016 F-150 5.0-liter V8.”

CNG conversions can provide stability against fluctuating fuel prices as well as lower vehicle operating costs for fleet administrators. CNG sells for an average of $2.11 per gallon of gasoline equivalent, as of April 30, 2015, and is as low as $1 in some parts of the country, representing a significant savings compared with unleaded regular fuel, and an even greater savings compared with diesel. The national average for unleaded regular fuel is $2.58 per gallon, while diesel sells for an average $2.81 per gallon, as of April 30.

Ford has sold more than 57,000 CNG/propane-prepped vehicles – seven times more than all other major U.S. automakers combined – since 2009. Sales have grown each of the last five years, reflecting Ford’s commitment to sustainability and offering customers true power of choice in alternative fuels.

Ford sold a record 16,821 commercial vehicles with CNG/propane gaseous engine-prep packages in 2014, and 2015 is shaping up to be an even stronger year. 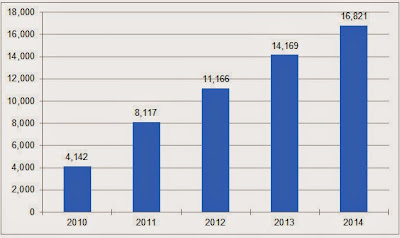 “The growth in interest for CNG/propane-prepped vehicles shows a shift in fleet customers’ mindsets,” says Dick Cupka, Ford ‎commercial vehicle sustainability leader. “They are becoming more forward-thinking about alternative fuels, taking into account their total cost of ownership and looking for ways to reduce their vehicle emissions.”

The most popular vehicles for CNG/propane prep packages are F-Series Super Duty trucks, while prep kits for the 2014 F-150 exceeded expectations by more than 40 percent. Ford sold more than 2,000 units in less than a year – and announced today it expects to sell even more gaseous fuel prep packages on the 2016 F-150 with 5.0-liter V8 engine.

The new 2015 Ford Transit has sold an impressive 836 CNG/propane-prepped vans and wagons since it became available in the United States in June 2014. Transit is America’s best-selling commercial van, based on total U.S. reported sales in the first quarter of 2015, contributing to Ford’s best first-quarter overall commercial van sales performance since 1995.

Ford sells an available CNG/propane prep option for eight of its commercial vehicle lines, ranging from Transit Connect to F-750, making it the broadest CNG/propane-capable portfolio of any North American auto manufacturer. This selection has grown since 2010, when Ford offered CNG/propane prep on E-Series vans and wagons only.

With the addition of the 2016 F-150, Ford Motor Company will offer eight Ford commercial vehicles available from the factory with a gaseous-fuel prep option – more than any other North American auto manufacturer. These include:

Transit Connect van and wagon with 2.5-liter I-4

Ford estimates as many as 70 percent of its vehicles purchased with CNG/propane packages are upfit before customers take delivery and another 20 percent are upfit within a year of purchase.

Ford has established a rigorous qualification program for alternative-fuel vehicle modifiers. Four of these modifiers are committed to offering CNG or propane bi-fuel and dedicated kits for the 2016 F-150 – providing true power of choice to Ford commercial customers who have unique vehicle requirements in different vocations:

IMPCO Automotive, based in Sterling Heights, Michigan – CNG and propane

Westport, based in Dallas – CNG

Ford Qualified Vehicle Modifiers offer a wide variety of CNG and propane options to help customers find the best, most cost-effective solution to their diverse operating needs. Ford maintains the engine and powertrain limited warranty (five years or 60,000 miles) for the vehicle. The modifier is responsible for the system component warranty and can provide additional details.

Ford maintains the engine and powertrain limited warranty (five years or 60,000 miles) for the vehicle. The modifier is responsible for the system component warranty and can provide additional details.

A total of six Qualified Vehicle Modifiers are able to convert the full range of Ford CNG/propane-prepped engines to run on natural gas or propane at 36 locations across the United States:

Altech-Eco, based in Asheville, North Carolina

ROUSH CleanTech, based in Livonia, Michigan

Westport, based in Dallas

Another benefit of this alternative fuel is cleaner emissions. Vehicles operating on CNG can reduce tailpipe CO2 emissions by approximately 20 percent when compared with the same vehicle operating on gasoline.

Ford Motor Company, a global automotive industry leader based in Dearborn, Michigan, manufactures or distributes automobiles across six continents. With about 194,000 employees and 66 plants worldwide, the company’s automotive brands include Ford and Lincoln. The company provides financial services through Ford Motor Credit Company. For more information regarding Ford and its products worldwide, please visit http://corporate.ford.com.
Posted by National Ford Truck Club at 8:00 AM